A SNAPSHOT INTO A LIFE WE WILL NEVER HAVE. 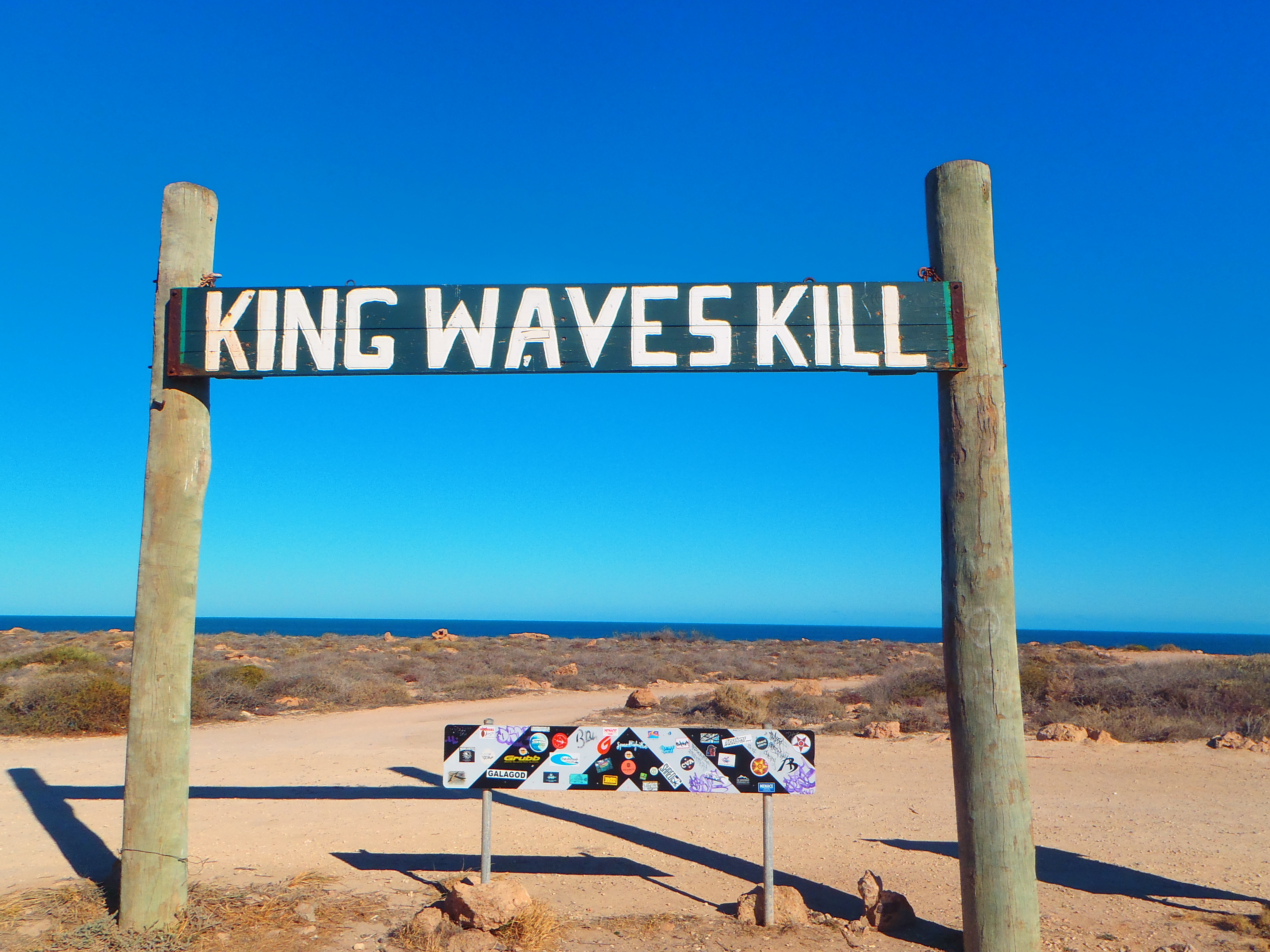 The coastline here is no longer protected by Ningaloo Reef and its wild. The swells smashing into the rock ledges are enormous, scary and impressive. Tonnes of angry, foaming white water smashing ferociously into the rock walls sending cascading plumes high into the air. It sounds like thunder and this is so not the place to do a bit of fishing from the rocky shelves. Plaques are left here as memorials to those who valued a fish over their own lives. They dared and lost because KING WAVES KILL. An enormous sign tells us so. The blowholes were amazing. The pressure of the incoming swells created quite a spectacular explosion, especially a really big wave.

We are at Quobba Station blowholes – a 137 odd kilometre coastal road detour just north of Carnarvon. Our destination was Red Bluff, a surfers paradise, to camp a little bit remote for a couple of days.

Following the narrow dirt track along the coastline we were so excited by the sight of so many humpback whales frolicking close to the shore. Red Bluff attracts local surfers drawn by the magnificent rolling swell on the point. This is the wild West Australian coastline. Clear, deep, cold water with huge waves that roll onto the beach in sets. They tower over the locals who frolic in them. This is their turf. They know the conditions. Not us. We don’t want to get pummelled and it’s too cold anyway. As each wave crashes into the shore it sounds like a cannon being fired. Awe inspiring and very majestic with the red bluff as a backdrop.

The camping here is totally unique. $15 per person per night camping and very rustic. Certainly, different than touristy Cape Range National Park but then this is a haven for surfers. I love this place because it gives us a snapshot into a different life. The life of growing up in Western Australia where your life revolves around the ocean (let’s face it; there is absolutely nothing inland.) A life where you are at home in the huge rolling surf that doesn’t faze you in the least and the bounty of the sea is yours to pillage. We chat to a young surfer dude. He camps simple; a swag next to his car, cooking squid stir fry for tea from the back of his 4WD with a squid he just caught, wetsuit hanging over a tree after a day spent catching the curling swells on his board. It’s a life we envy (especially Kevin) but us or our children will never have. Kevin surfed in South Australia when he was younger; some of the best times in his life. So, he’s drooling with envy. I’m so glad we took this little detour. It was touch and go but we figured while we are here we should. We are richer for the experience for sure. 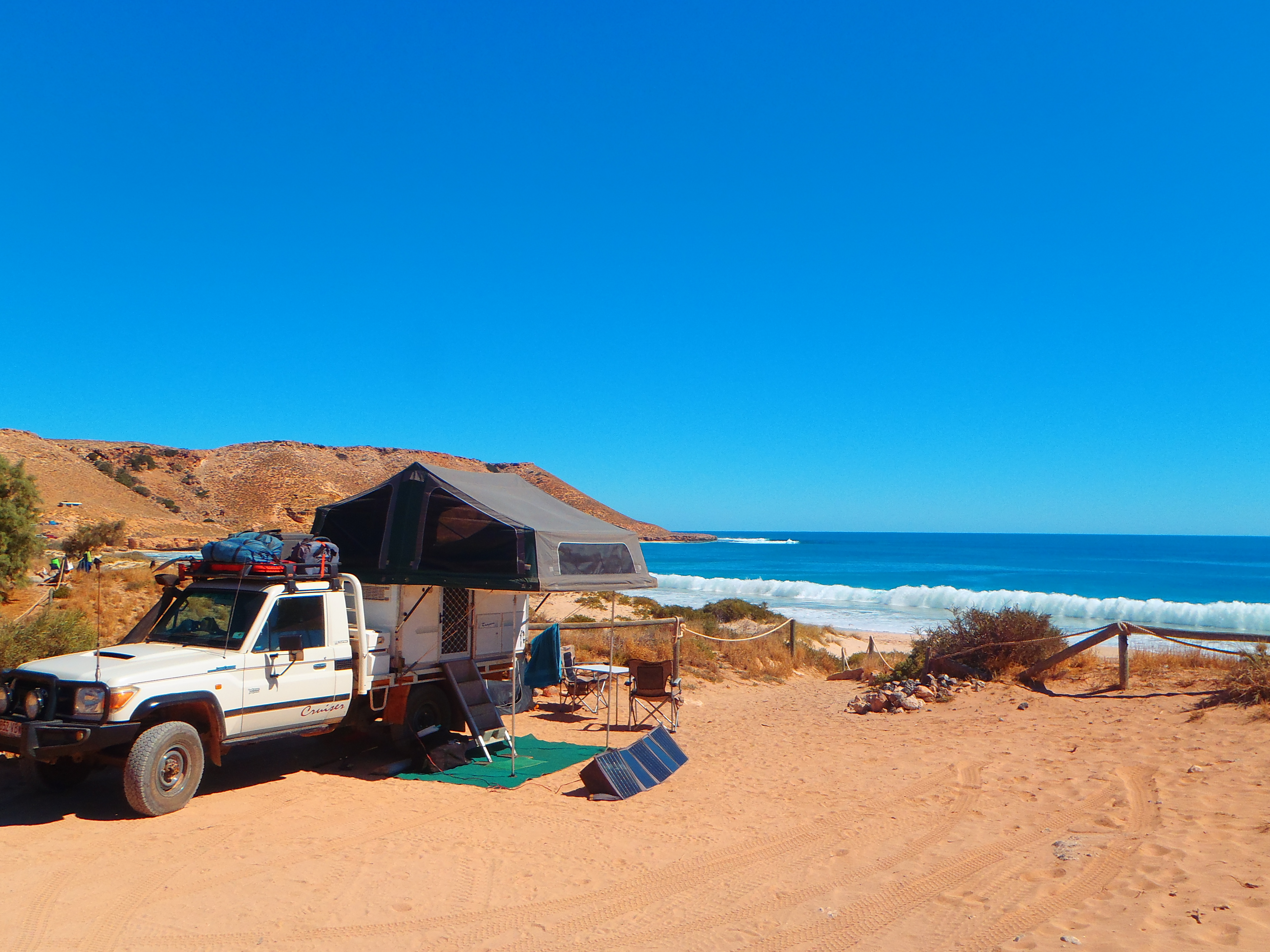 Red Bluff is exposed to the cold August wind but we enjoyed it immensely. The raw power of the Indian Ocean is quite a sight to behold and the sunset was pretty damn magnificent. I know we always rave about the sunsets in WA but this one was particularly impressive with the spray from the cascading waves as part of the equation.

I was lucky enough to born an Australian. I love this beautiful country. I’ve spent time living in South Australia, the Red Centre and Tropical North Queensland and have travelled far and wide in this great Southern Land. The excitement of an overseas holiday is wonderful, but for me, nothing can rival a great Aussie Road trip. In a 4x4, the more remote the better. Where the scenery is unique and the people are so few that you feel like the only person in the world. There’s no timetables, no stress and no airport queues. Just a big blue sky and a road or dirt track that leads somewhere special. This is my home and this blog is my way of sharing it ❤️ View all posts by letusbefreeblog

One thought on “Coral Coast of WA: Quobba and Red Bluff (waves and whales)”

Still can’t believe how lucky we were to jag this spot to live in our van while we keep working for a while. With summer in the Red Centre on its way, a bit of green grass and a shady tree to read a book goes a long way. It’s very warm in the van during the day already 🥵. Summer is going to be an eye opener this year I reckon 😳☀️☀️#willbedreamingofthebeach #vanlifeinsummer #vanlife #redcentresummer🥵
Enjoying a moment. As the sun sets the moon peeks above the range. The galahs are having an attack of the crazy’s and it’s just a very sweet time of the day here in the Red Centre #redcentrent #sunsetmoonrise #momentsofmine #beherenow
Sunset feels ❤️. No campfires allowed at our van dwelling so any opportunity to add a dose of campfire ambience
Always said we are gonna do this one day. A Mamas Pizza with a view from ‘our bench on the hill’. Tonight’s the night. #pizzagram #noregrets
Classic Central Australia. The Ghost Gum is my favourite. Statuesque and graceful. Exploring the Ilparpa clay pans by foot on this glorious morning. #redcentrent #centralaustralia #ghostgum #morningwalkscenes #ilparpaclaypans
#dayslikethese #mybackyardinthedesert #redcentrewoman #sunshineinwinteristhebest #daysoffbelike #vanlife
Follow let us be free – An Australian Travel Blog on WordPress.com